It is with great interest that I have followed the progress of “The Glasgow Whisky Distillery” on the banks of the Clyde in the city centre. It is going to be sited at the old Pump House which was built in 1877 to provide hydraulic power for Queen’s Dock. The Pump House building lay derelict for some time until it was revived for the Glasgow Garden Festival in 1988. Having worked at the Liverpool Garden Festival back in 1984 manning the Oranjeboom Dutch Lager Tent, I remember the Glasgow Garden Festival well – happily not as an overworked barman this time.

The Glasgow Whisky Distillery is the brainchild of industry stalwart and veteran, Mr. Tim Morrison (whose great grandfather John Morrison, built the Pump House in 1877), a charming man whom I met many years ago whilst assisting on a photo shoot to promote Morrison Bowmore’s brands in the Far East. The male model for the shoot took ill on set and yours truly had to step into the breach – thank goodness the 52 sheet posters were only aired in the Far East and not in my native Glasgow. 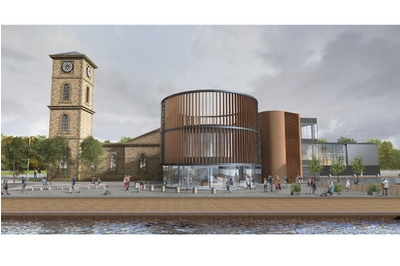 The Glasgow Whisky Distillery is going to include an interactive visitor experience, a whisky museum, a specialist whisky retail outlet, a whisky tasting bar and of course, the main attraction; the whisky distillery. This is great news for Glasgow and the Scotch whisky industry. Hats off to Mr. Morrison for having the foresight and tenacity to pursue this initiative.

In the meantime, if you can’t wait for the Glasgow Whisky Distillery to open, you can always try visiting A. D. Rattray’s Whisky Experience and whisky shop in Kirkoswald, Ayrshire.

A. D. Rattray Ltd is owned by the aforementioned Mr. Tim Morrison, a fourth generation descendent of Andrew Dewar Rattray. The company’s revival started in 2002 with the bottling of  “Stronachie” 12 year old. In April 2004, Mr Morrison then bottled a selection of his own handpicked stock of whiskies for market release and the A. D. Rattray “Cask Collection” was born.

Good luck to Mr. Morrison and his associates in this new venture; The Glasgow Distillery.