There has been a surprise result already; the mighty Springboks were humbled by Japan (1000-1 outsiders to win the World Cup in some quarters) in a very exciting game, with a winning margin of only two points. Very well done Japan!

As I write this blog, Japan’s next opponents are Scotland; that match kicks off in less than 48 hours. There was much press coverage earlier this year when Japanese whiskies had strong showings in almost all the recent World Whisky Awards with the verdict from some “worthies” that Japan is more than a match for Scotland these days in the quality of its malts. Strong words indeed. At Whisky Please, we never decry whisk(e)y from other countries; that’s not our style. Before Japan showed the Springboks a clean pair of heels, I’d have said let’s see who’s best on the pitch; but not now!

As a schoolboy I used to go to Murrayfield (Scotland’s national rugby stadium in Edinburgh) to watch Scotland play, in the hope (more than expectation) that we’d get a result against whoever we were playing ; especially England. 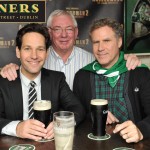 I recall once travelling to Dublin to watch Scotland vs Ireland only to be told by a Dubliner in Toner’s Bar before the start of the match “You’ve come a long way to be disappointed” – sadly he was right; although the Guinness didn’t disappoint. If you ever find yourself in Dublin, look out Toner’s Bar in Baggot Street; you will not be disappointed. 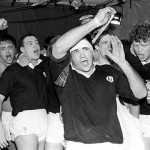 So what about the Scottish Rugby team down the years? I’m old enough to have witnessed some glory (Scotland’s 1990 Grand Slam) and a lot of dross (pick most years before and after 1990), but the one welcome constant over the past 23 is the sponsorship of the national team by The Famous Grouse Whisky. This sponsorship has gone a long way to help youth rugby flourish in Scotland and make some of the great players we have in Scotland today. So come on chaps, let’s show the Japanese team that they had it easy with the Springboks; prove to them them who has the better national rugby team and the better whisky! RWC2015.