Whisky in Movies and TV

You’ll have been sitting in the cinema or at home on the sofa and the movie or TV programme you’re watching will feature a bottle of whisky; it sticks out like a sore thumb amongst the bland “props”. With today’s more relaxed product placement rules, the whisky will be recognisable rather than sporting some made up label produced by an amateur graphic artist to adorn and disguise a well known shape of whisky bottle.

Here are just a few examples of whisky in movies and TV I remember, either in a starring role, or bit part. 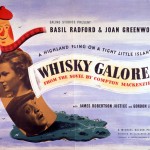 This 1949 film is based on the novel “Whisky Galore” by Compton MacKenzie. Both the original film and the novel are based on the real-life 1941 shipwreck of the S.S.Politician near the island of Eriskay and the unauthorised taking of its cargo of whisky. As I type, there is a remake of Whisky Galore being filmed featuring Eddie Izzard, Gregor Fisher, John Sessions and many more media luminaries. The original film was filmed on Barra and the remake is being filmed in /near Portsoy, Banffshire. 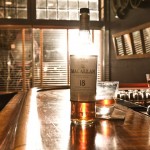 featured prominently in Bond films of late. Did you make the connection that the Macallan 1962 shares the same birthdate as the first Bond film? As we know from other Bond films, M likes a quality dram and in Skyfall, M also drinks The Macallan. I can’t see which exact age the whisky is, but looking at the shape of the bottle and colours on the label, it is definitely The Macallan Sherry Oak whisky, either 10, 12 or 18-year-old.

Samuel L. Jackson comes in from the cold in this movie and sips a Dalmore 1962. It is a mere snip at circa £125k a bottle. Despite the chap initially holding the glass being cut in two; he doesn’t spill a drop and Samuel is able to finish it off. Have a look at the clip here.

Whilst he loved a beaker of foaming mead, Inspector Morse was also a big fan of Glenfiddich. The writer of Morse, Colin Dexter, imbued the Inspector with may of his own characteristics. When once interviewed, Colin Dexter was asked if it true that he once said that given a week left  to live he’d get a crate of single malt in? He was aghast at the suggestion.  “No, no , no,” he insisted. “That’s a terrible misquote. I’d get two crates in… and a few thousand cigarettes.” Dear me, they don’t make them like Colin Dexter anymore.

A delightful movie and well worth a watch. Many lovely whisky related hi jinks and merry japes are 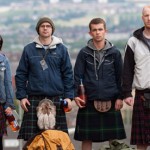 featured. Not to spoil it if you haven’t seen it, but can three bottles of whisky appropriated by a few Glasgow scallywags really be sold and net them £100k? The movie also has a great soundtrack.

Let us know your favourite Whisky in Movies and TV moment and we’ll give the first six people to inform us of their favourite clip here, a delightful whisky map drink’s coaster to rest their dram on.