I never understood why, when Perrier was (virtually) the only mineral water on offer in swanky London restaurants in the early 80’s, the waiting / bar staff offered you the chance to ruin a clear, pure, mineral water by polluting it with ice cubes made from London tap water by asking “Would you like ice in your Perrier Sir?”. Of course, you can substitute most cities’ ice for London’s and have the same detrimental effect that the London ice had on mineral water. Why not just drink the water at the (hopefully) chilled temperature it came out the bar fridge at and forego the ice? 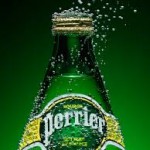 And so to the popular discussion about what you put in your whisky – ice or water? Well, the same proposition I mention above holds whether it is ice or water you put in your whisky. Putting treated tap water / ice into your dram can go some way to impairing the subtle notes that have been carefully weaved into the dram by the Master Distiller. Myself, I favour a splash of water, and only ever a splash of water – just enough to dilute the strength to what I deem to be favourable and open up the flavours. Most whiskies that have an alcohol level of between 40 and 46% a.b.v. already had some water added in a process is called “cutting”. This is done before bottling in order to bring the alcohol level down.

There are of course dozens of bottled waters on the market now and all bring slightly different nuances to a dram when added. One of the newest is water from Loch Ness. I am not minded to debate the benefits of one brand of bottled water versus another, but I suggest that the next time you are in a classy bar / restaurant and are going to treat yourself to a nice dram, maybe think about where the water that you may want to use to slightly dilute your dram has come from. You can, of course, ask the posh bar person to open up a bottle of Scottish water for you to add to your dram – Scottish water mind, none of that French stuff that started it all.