The Rugby World Cup 2015 quarter finals are in sight.

Some teams have been consigned to going no further in these finals. We have seen some great games and seen some upsets; the biggest upset so far must be Japan’s humbling of the Springboks. With the rugby world cup in Japan in 2019, they have done much to position themselves as a nation not to be dismissed in world rugby.

As I write, there is a question mark over the use of Japan’s national stadium for the 2019 rugby world cup, but I’m sure all will be resolved in plenty of time with great efficiency.

Nearly all the UK home nations are looking like progressing to the quarter finals, with the obvious exception of the host nation. The failure of England to progress to the knockout sections has been well documented. No need for me to comment.

What dram do we recommend to watch the remaining games with? We have plenty on the Whisky Please site to choose from. 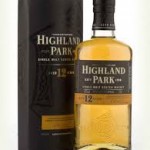 Something from the Islands perhaps? How about Highland Park 12 Year Old – a great dram from Scotland’s most northerly distillery? This is a smooth, balanced single malt, with a rich full flavour and a gentle smokey finish. A beautiful whisky.

The Scottish borders have produced some world class rugby players over the years – Glenkinchie Distillery is very close to those rugby heartlands and also very near to the home of Scottish rugby; Murrayfield Stadium.

Glenkinchie 12 Year Old Single Malt Whisky was released in 2007 to replace the 10 year old. It is a light, delicate whisky; sweet and creamy with a subtle floral fragrance.

We wish you an enjoyable remainder of the Rugby World Cup 2015. If your nation gets knocked out, support your nearest neighbour – adopt them as your second nation.