The mighty water of life is far reaching in this world. I recall having a dram many years ago with the owner of a world famous distillery. His research showed that their whisky brand was on the shelf of more than 95% of all the bars in the world. So I then thought – what examples are there of whisky extremes?

With the announcement this week of the return to earth of a vial of Ardbeg that had been in space for the past three years, I thought I’d have a root around and see where the most extreme parts of the world are that whisky has been seen; if not actually drunk there.

The most extreme place where whisky has been must be outer space.

Ardbeg launched their experiment into space in 2011 in the shape of vials of Ardbeg crafted molecules, where it orbited the earth on the International Space Station 15 times a day. 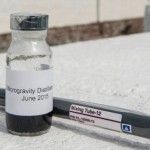 The vials contained a class of compounds known as ‘terpenes’. Ardbeg was invited  to take part in testing these micro organic compounds in a maturation experiment (the interaction of these compounds with charred oak) between normal gravity on Earth and micro gravity i.e. space.

The experiment came safely back down to Earth in Kazakhstan, Central Asia on 12th September 2014.

Dr Bill Lumsden, Ardbeg’s director of distilling said: “The space samples were noticeably different; much more of Ardbeg’s smoky, phenolic character shone through revealing a different set of smoky flavours which I have not encountered here on earth before. The results of our experiment show that there is potentially even more complexity that we can uncover, to reveal a different side to the whisky.”

Whisky Extremes; Talisker on the Atlantic.

Crossing the Atlantic is never an easy undertaking. The very first crossings were made to discover and explore new lands. Today, most crossings are made by huge cargo ships exporting essential commodities across the ocean.

But some daring people choose to row across the Atlantic to test the limit of their physical and mental strength; to achieve something unthinkable. 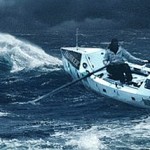 The idea of the Atlantic Challenge race came to Sir Chay Blyth whilst he was rowing the Atlantic Ocean in 1966 with John Ridgeway. It was a 92 day battle against hurricanes, 50 foot waves and near starvation.

It’s no surprise then that more people have been into space, or climbed Everest than have rowed the Atlantic. It takes a certain kind of person to keep going when faced with blisters, salt rash, sharks and sleep deprivation.

That’s why the Talisker Whisky Atlantic Challenge is the world’s toughest row; less than 100 days now until the start, with each boat carrying a bottle of Talisker as cargo.

Whisky Extremes; Mackinlay’s in the Antarctic.

Ernest Shackleton’s journey has been documented before in this blog; we are huge fans of the recreated “Mackinlay’s Shackleton” whisky. There can be few more extreme places where whisky has been on the earth; unless, of course, you consider Everest to be more extreme…

In May 1993 Rebecca Stephens MBE became the first British female mountaineer to stand at the roof of the world – with only four years’ climbing experience. 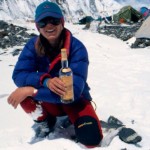 Rebecca’s summit bid was backed by Glenmorangie, which also provided the team with Glenmorangie 10 Years Old to raise their spirits at Camp Two.

This is believed to be the highest a bottle of single malt has ever reached on Earth.

Rebecca has said of her feat; “The support we received on our climb was invaluable and our bottles of Glenmorangie raised spirits in every sense. It’s only when Glenmorangie showed me the pictures from their archive that I realised how significant taking that bottle up to Camp Two had been: to be honest, I hadn’t thought to mention it!”

Wherever you decide to imbibe your favourite dram, enjoy it!